Wiley Pitman and Five Notes that Changed the World 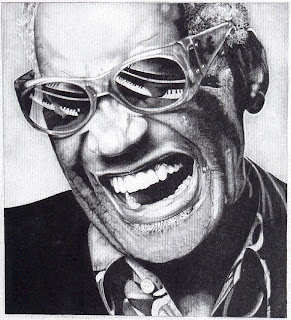 Several years ago I watched the movie “Ray”, a biopic on the life of Ray Charles. There was one scene from the movie that really struck me as a musician. Ray Charles as a child of about three-years-old lived next door to a café and general store owned by Wiley Pittman who happened to be a great boogie-woogie piano player. In those earliest years of Ray’s life, before he had become totally blind he would drop by Pittman’s not just to listen to him practice but because he wanted to learn how to play the piano himself. The scene from the movie that really got me was how Wiley Pittman was able to teach Ray to begin playing the blues by introducing him to the pentatonic scale – five notes which provide the foundation for many styles of music from around the world from Chinese to Celtic to Blues to Country. The scene really connected with me because it reminded me of how those same 5 basic notes of the Blues scale changed my musical life as well.

I started taking piano lessons when I was around eight years old, but for the most part the first five years of piano lessons failed to really engage my heart. But one day, when I was probably about fourteen years old, I walked into a local music store to look at keyboards. That keyboard salesman will never know how, in trying to sell me a keyboard, he changed my life by introducing me to the very same pentatonic scale which got Ray Charles going as a child. Up to that day I had known how to play the piano a bit and I was even beginning to write some of my own songs but the simplicity of pentatonic scale brought it all together in a way that piano lessons never did. It connected the dots to what I had been stumbling on intuitively. All of the sudden a whole new world of musical possibilities opened up for me.

Within weeks I was writing blues songs and beginning to figure out some blues licks. Over the next four years that followed, my musicianship grew exponentially in all kinds of ways. It wasn’t that I had learned nothing in those few years of piano lessons. It’s just that I got more out of that few minutes with a keyboard salesman because it connected with my heart and my mind in a way that my lessons never could—in a way that changed the course of my life. Had I not had that encounter at that point in my life I might not have pursued music the way that I had and my life would have certainly taken a different path.


14The Word became flesh and blood, and moved into the neighborhood. We saw the glory with our own eyes, the one-of-a-kind glory, like Father, like Son, Generous inside and out, true from start to finish.

This is a scripture that is no doubt familiar to many Christians but one which doesn’t seem to inform how many Christians practice their faith much. In this simple verse John kicks his gospel off with the revolutionary truth of the incarnation—God loved us not from a distance as Bette Midler once sang but by entering our neighborhood, our world, the place where we live, as one of us... as a human, with everything that goes with being a human—hunger, physical limitations, morning breath, and so on.

Throughout the gospels the Pharisees seem mainly concerned with the trivialities of following the law, with how to be righteous, with who’s in and who’s out, with religious rituals, and with the fine points of doctrine. But Jesus, on the other hand, didn’t waste time on long theological statements or religious platitudes, rather he related the realities of the kingdom to things that people encountered in everyday life: “The Kingdom of God is like a mustard seed”… “There once was a guy who owned a vineyard”… “A shepherd lost a sheep”… “A son asked for his dad’s inheritance”. It wasn’t that Jesus was incapable of debating religion with the most intellectual minds of his day but to do that would have missed the point of why he came. The reality is that he loved us enough to not only enter our world as a human but to engage us on human terms, in familiar language and in the everyday places where everyday people live whether at a wedding feast or on a fishing boat or at a party with tax collectors. While the Pharisees were busy avoiding people and making it hard for others to be a part of their “club”, Jesus was busy meeting people right where they were with the good news that no matter their background, social status, race, or moral state they could enter into the kingdom of God.

I read something by Henri Nouwen once that I think gives us a great starting point:

Have you ever known someone that embodied the above quote? I think we all have at one time or another. When you feel like someone is genuinely interested in you, and sincerely listening to you, and right there with you (as opposed to somewhere else in their mind) you feel like they care. Why? Because in a very simple way they are entering into your world and meeting you right where you are.

Let’s look back at Ray Charles for a moment. Wiley Pittman provides us with a good analogy of what it looks like to enter into the world of another and help them understand something in a very simple way. Had Wiley Pittman not tried to show little Ray music in a way that he could get it, or had he just been too bothered by the pestering of that little kid wanting to bang on his piano and interrupt his practice, our world would have missed out on the amazing treasure of Ray Charles’ music. But Wiley Pittman instead met him right where he was with a simple idea… simple enough for a three-year-old… five notes that changed his life.

As Christians we are faced with a couple of options: Like the Pharisees we can make it harder for people to grasp what God is about with confusing language, customs, and traditions, or we can go the way of Jesus and connect with people right where they are—listening more than speaking, meeting folks on their terms, being present when we are with them, and being deliberately simple when talking about God.

Perhaps our biggest enemy is our own experience. Sometimes we think because of our experience with God that we have somehow become experts and like the Pharisees we can so easily begin talking like experts and alienating the very folks we want to encounter God. Jesus once encouraged his disciples to become like children for “such is the kingdom of Heaven”. While Wiley Pittman was a seasoned piano player of many years he had not lost the ability in his experience on the piano to connect with a child. Perhaps this is a bit of the childlike quality Jesus is calling us to.
Posted by Crispin Schroeder at 6:41 AM

Good stuff Bro. I think your comment of "Perhaps our biggest enemy is our own experience" really resonates. May we all, esp me, continue to be slow to speak and quick to listen.... Thanks. TA

I saw the link to your podcast of this blog and, since I couldn't listen to the whole thing, I read it on here. This is exactly the answer to a question I've been asking God for a while. I'm going to start reading your blog regularly and if you have suggestions on other reading material to help me develop as a christian minister to the world around me, that would be great. Thanks for being so faithful to the work to which Christ has called you. Later.