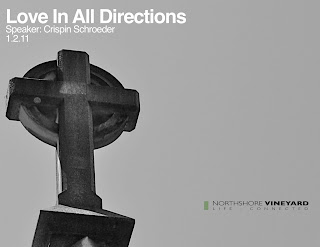 I have rarely posted links to messages that I have delivered at Northshore Vineyard but today I want to toss up some material from my message from last weekend called Love in All Directions .  I wanted to post about this message because in many ways it has been a development of ideas I have wrestled with in the last few years on this blog.  I recommend listening to the message when you get a chance (also find it on the Northshore Vineyard Podcast on iTunes).

I developed the following diagram for understanding various different expressions or philosophies of church. 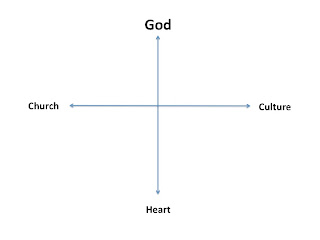 This diagram gets at the vertical an horizontal aspects of the Christian faith. 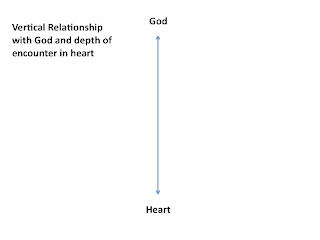 The vertical axis deals with a person or church's relationship with God at the top and then the depth of that encounter in the heart (which can also be thought of in terms of transformation). 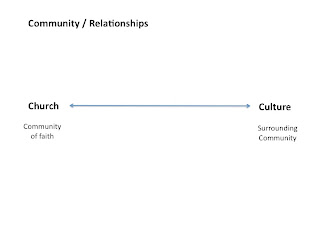 When you put the vertical axis and the horizontal axis together then you can plot different types of churches based on what their philosophy of ministry is.  There are no doubt sociology and religious studies professors out there who have come up with ideas that might be more scientific but this kind of diagram has really sprung from my years of wrestling with church (much of it on this here blog).  I will now turn our attention to some various types (or should I say stereotypes) of churches as plotted on this diagram.

THE SUBCULTURE CHURCH
The subculture church exists in the quadrant of Christian Community and God.  This type of church is defined by very tight community.  Much of this is due to seeing the outside culture as something to either retreat from or battle.  A subculture church will be markedly different from the culture, so much so that a person who has not grown up around the subculture will have a very hard time connecting.  For instance a church's worship may be composed of songs which were all written hundreds of years ago and are played on a pipe organ (while I am using a more traditional example the same could apply to a very wild and less traditional service as well).  Though the music may be beautiful and the lyrics quite meaningful a person outside of that subculture will have no grid for that kind of music in ordinary life because it is not common in the culture at large. 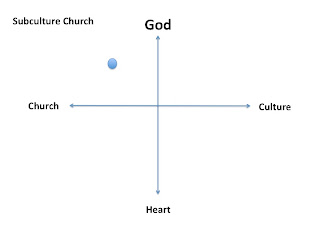 When I was on staff as the worship pastor of the Kenner Vineyard I would find myself frequently hanging out with two or three sound guys at a time after our worship band practice.  While I know a little bit about running sound, I don't have much technical understanding so when the conversation would inevitably shift to technical matters I would feel cut off from the conversation.  Though I was sitting right there with these sound guys their use of the terms decibels, megahertz, signal path, compression thresholds, noise floor, diodes, and capacitors would create distance between myself and them.  Immediately I became an outsider.  In the same way a subculture church creates distance with a use of terminology that is very hard for outsiders to comprehend from using the King James version of the Bible or simple insider language with words such as sanctification, lost, or hallelujah (without any attempts to define them for outsiders).

The strength of the Subculture Church is that it forms tight community and yet this is also it's weakness.  Subculture Churches are bound to whither and die because they have no meaningful connection with the outside culture. 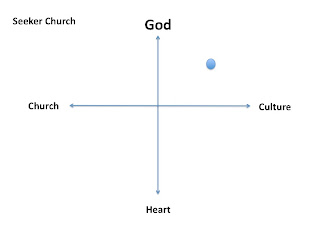 In the early nineties Willow Creek Church in Chicago emerged as a pioneer of a whole new way of doing church that didn't seek to retreat or battle the surrounding culture but rather to connect with it in a meaningful way.  Throughout the nineties many churches adopted this approach as they realized the weakness of the Subculture church model.  Seeker churches have become the largest churches in America in the last 20 years fueling the whole mega-church phenomenon.  A Seeker Church takes great care to connect with the culture.  This means that the worship service in a seeker church will not sound all that different from the kind of music people tend to listen to in everyday life.  Seeker churches also make a point to steer away from insider language that might alienate those who have no grid for church or Christianity.  The strength of seeker churches can be seen in their results as some of the largest churches around the country are of this philosophy of ministry.  The downside of the seeker model of church is that while it is great at connecting with those in the culture it often is not so great at making disciples or bringing folks into authentic Christian community.
THE DR. PHIL/OPRAH CHURCH
This church exists in the quadrant of the culture and the heart.  A good example of a gathering that might exemplify this philosophy is Alcoholics Anonymous.  While I do know of very Christ-centered AA meetings, many AA meetings give little more than a nod to God (in terms of admitting that there is some nebulous higher power out there).  While AA does a great job on connecting with the culture and dealing with the internal issues that fuel addictions there is not typically much emphasis on relationship with God or growing in Christian faith. 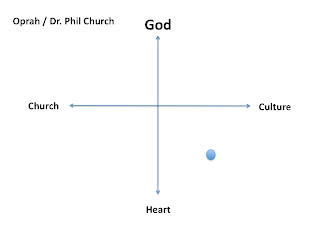 THE HOSPITAL CHURCH
The hospital church lives in the quadrant of the church and the heart.  Hospital churches have sprung up to help heal those who have been wounded both in the church and in the culture.  Years ago I found myself in one such church after having gone through some really rough times in church.  I came in bruised and beat up and ready to give up on church but I found a place of healing.  A hospital church is big on grace, low on expectations, and genuine in their relationships, which is their strength.  As most hospitals, they are not so concerned with connecting with the culture but rather taking care of the ones who show up.  The weakness of the hospital church is that it has very little sense of mission or outreach outside of healing the wounded and once people get healed up a bit it doesn't make much sense for them to keep sticking around (this would be like coming to a hospital after being in a car wreck, getting treated for your injuries, going through rehabilitation, and then wanting to keep staying in the hospital once you were healthy). 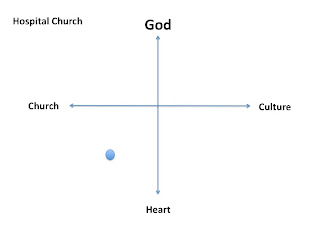 THE CONNECTED CHURCH
As I have wrestled with the type of church I wanted to plant and as I still work to direct our fledgling congregation I would say that I want to be a connected church.  A connected church is marked by its connections to the Christian community and the surrounding community, to God and to the heart.  I desire that Northshore Vineyard would be a place that connects with people right where they are but begins to bring them into meaningful community around Jesus.  I want this church to be a community that takes the inward journey seriously as well, a church that sees the healing of internal emotional issues as a part of discipleship.  I want our church to be a place where those who have been beat up and battered by religion could not only find healing but also be mobilized into mission to bring that healing to bare on the broken world around us. 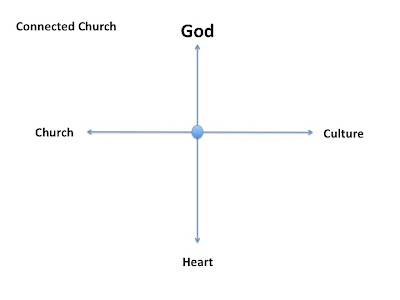 Being a connected church is much harder than living in any of those 4 quadrants because it means living in tension.  It is much easier to live in the black and white world of the subculture or to just flat out rebel against Christian community altogether but we will endeavor to live at the intersection of God, heart, church and culture.
Posted by Crispin Schroeder at 10:18 AM

Excellent blog, Bro. And you know I love the mathematics analogies! Let me ask you this - in the last sentence of the "Seekers" church overview you said "The downside of the seeker model of church is that while it is great at connecting with those in the culture it often is not so great at making disciples or bringing folks into authentic Christian community." My question is, if that is the predominant "non-positive" of that model, could that not be overcome by creating "smaller communities" within the larger church? If so, then it does not appear to be radically different than what we propose to eventually do, does it not? Thanks again for that well explained and thought about blog. TA

Keep in mind that all of these types of churches are stereotypes. Very few would fit into such neat categories. I propose that a "seeker church" that does the hard work of discipleship and growing authentic community will move more to the center. i don't think this means that it will fail to attract "outsiders" in fact I think a model that is built with small, authentic, missional communities will be even more attractive to people outside the church.